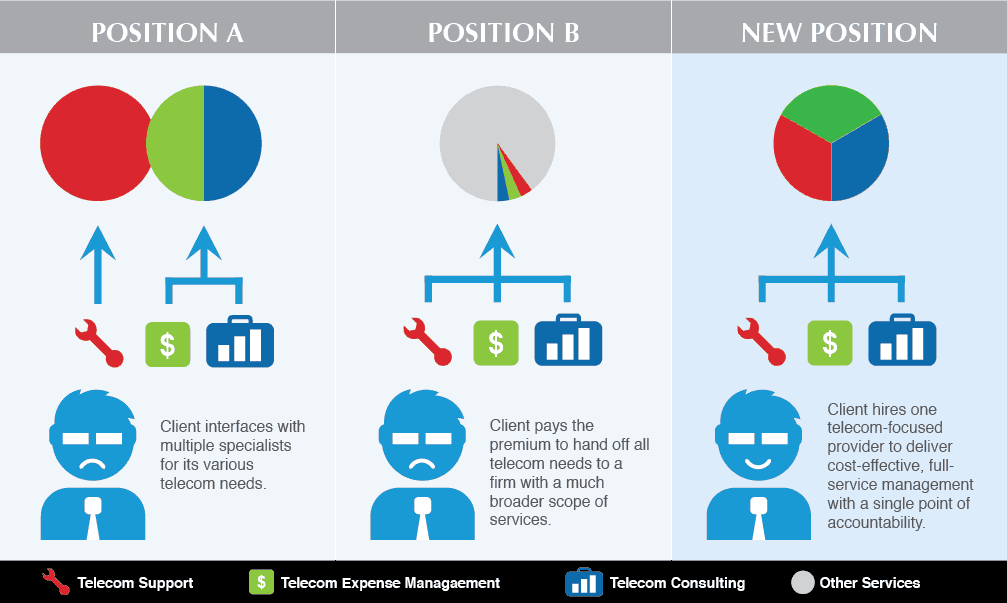 Using research to make sense of a complicated marketplace

Using thorough research, Simple Machines identified that ICOMM’s competitors fell into the POSITION A or POSITION B and that ICOMM had the opportunity to build upon a powerful NEW POSITION.

A critical goal of every branding initiative is clarity – expressing a company’s brand so that the audience understands it completely. Sometimes, you have to look outside the box to make sense of a confusing marketplace. Case in point: ICOMM.

ICOMM approached Simple Machines to develop and launch a marketing operation. Research indicated that ICOMM was facing a diverse set of competitors marketing unique and complicated sets of services – much of which overlapped to varying degrees.

The complexity of the competitive landscape created a situation in which it was difficult to stand out – not because every company seemed the same, but because they were different in so many subtle ways that it was difficult for consumers to parse the pros and cons of each.

Finding a way for ICOMM to stand out relied on thorough research and creative thinking. After using several sources to differentiate ICOMM and its competitors, Simple Machines organized the field by itemizing services and specialties offered by each provider and analyzing messaging themes to identify patterns. When no clear patterns emerged, the field was analyzed again – this time from a broader perspective. Rather than comparing ICOMM’s scope of services to those of its competitors, Simple Machines compared the benefits of ICOMM’s service model to the benefits of competitor models, as this would likely be a major factor for clients when making buying decisions.

This proved to be a breakthrough in the planning process. From this angle, Simple Machines was able to make critical distinctions and organize the field in a way that hadn’t been done before. It was now apparent that there are clear benefits to ICOMM’s unique cradle-to-the-grave approach – and that a strong new position could be forged upon this differentiator.

With the position defined, Simple Machines honed ICOMM’s messaging to effectively sell the benefits of its approach. In the nebulous field of B2B technology, clearly expressing ICOMM’s value could be a big competitive advantage and a powerful foundation for its marketing operation.

Originally founded as I-Comm Corp in 1987, Forest Park, Illinois based ICOMM has grown from a two-person firm to its current size of over 30 full-time staff members by providing “big picture” awareness and high ethical standards to its telecom practice. From voice and mobility support to expense management and telecom consulting, ICOMM has helped a wide variety of businesses harness their communications technologies and achieve optimal efficiency.

As a relatively small business with limited visibility and name recognition, ICOMM needed to sharpen a brand that would resonate with its target audience before investing in channel execution. The business knew its combination of service offerings and real world telecom expertise was important, but it wasn’t entirely clear whether this was unique or exactly how it should translate into brand messaging. To launch a marketing operation that would start on the right foot, ICOMM contacted Simple Machines.

After meeting with ICOMM to develop an understanding of the business and its goals for growth, Simple Machines researched and analyzed ICOMM’s competitors and market in order to determine its most promising opportunities. Based on the findings, Simple Machines recommended branding and messaging that used a new position based on a unique model for full-service telecom management. With compelling new messaging in place, ICOMM is now well- positioned to grow as it moves forward with channel execution.

Sign up to receive helpful marketing tips and insights each month!